The screening of Jasmina Cibic’s film Fruits of Our Land and a conversation with the artists will precede the opening at 6 p.m. in the CAME café.

The curator Anders Härm has written an excellent essay on that:

/—/ The current exhibition is about architecture as an effect, as a trigger that sets desire in motion, becomes an obsession, makes artists dig deep into history or the ideology of a house, or to capture every strange imbalance, mistake or fault in architecture. In a way, all the participating artists have this somewhat phantasmatic relationship with architecture although it surfaces in very different ways. Architecture, the image of a house or some kind of spatial structure, is here used as a surface or a lens – as a Black House – in order to reflect the political, historical, mnemonic, ideological, personal and even romantic aspects of the built-up environment and thus the society./—/ 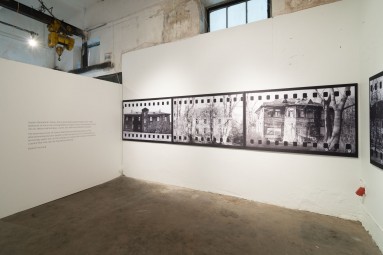